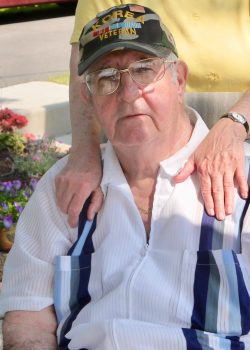 Warren “Yorkie” York, Jr., also affectionately known as “Moe”, age 87, of Duryea, passed away Monday morning at Hospice of the Sacred Heart in Dunmore.
Born on June 12, 1932, Warren was the son of the late Warren, Sr. and Bessie Jumper York. Attaining the rank of Sergeant, he proudly served in the U.S. Army during the Korean War prior to an Honorable Discharge from service.
For over 30 years, he worked as a group leader at TOPPS Chewing Gum Co., Duryea, before his 1994 retirement. He was also a longtime member of the Nebo Congregational United Church of Christ. Passing away suddenly, he will always be missed by his loving family and friends. Yorkie was known for his friendly attitude and quick wit. He enjoyed going out to eat, especially getting breakfast with his family and friends. Yorkie’s family would like to thank the staff at the VA Hospital and Geisinger Wyoming Valley for their compassionate care.
He is survived by his son, Richard Farrington of FL.; his sister, Shirley Osborne Mroz of Duryea; and many nieces, nephews, great nieces and great nephews.
He was also preceded in death by his siblings, Charles, Dale, Donald, Robert and Emma York and Anna Leschinsky. He was also preceded in death by his nephews, Robert “Oz” Osborne and John “Paduke” Leschinsky.
Funeral services by Rev. Arthur G. Harshman are scheduled for Monday at noon in the Thomas P. Kearney Funeral Home, Inc., 517 North Main Street, Old Forge. Interment with military honors by the AMVETS Honor Guard will follow at the Marcy Cemetery, Duryea.
Relatives and friends may pay their respects on from 10:00AM until services.