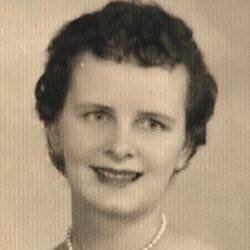 Tekla “Tek” (Rushefski) Kuchinski, age 90, of Moosic’s Greenwood section, passed away Thursday morning at Allied Skilled Nursing Center in Scranton, after an illness. She was preceded in death by her beloved husband, Henry “Hank” Kuchinski, on December 2, 1987.
Born on January 13, 1930, raised in Old Forge, Tek was the daughter of the late Andrew and Tekla (Augustinski) Rushefski. An Old Forge High School graduate, she not only served as a drum majorette but was also founder of the school’s drum major organization as well.
Tekla met her husband Hank, soon after his return from WWII. They went on to raise a family of five children together and ultimately became the propietors of Kuchinski’s Meat Market in Greenwood where they were well-known for their homemade kielbasi, sausage and kishka. Later in her life, she worked for her brother-in-law at the Steering Wheel Inn in Moosic, before working for her sister at Mac’s Cafe in Old Forge.
An amazing cook whose dedicated work ethic spanned her entire life, she was also caring, kind and loving to all. All who knew her adored her and she’ll certainly be missed by her family and friends alike.
She is survived by her adoring children, Andrea Schroff and husband Dr. Richard of Carrollton, Virginia, Henry Kuchinski, James Kuchinski and John Kuchinski and wife Robin, all of Moosic, and Michael Kuchinski of Mechanicsburg; grandchildren, John Morgan of Califoria, Dr. Elizabeth Schroff-Rettie and husband Jordan of North Carolina, Samantha Schroff and Richard Schroff III, of Virginia, Kaitlyn Falandysz and husband Bobby of Moosic and Lindsay Dunn and husband Philip of Duryea; great grandson, Philip John Coleman Dunn of Duryea; loving siblings, all of whom she loved visits from, Stella Materazzi and Paul of Florida, Theresa Zupko of Old Forge and Dr. Charles “Cookie” Rushefski, whom she was so proud of, and wife Audrey of Florida; sisters-in-law, Genevieve Kuchinski and Dorothy Molinaro, Tek’s best friend who she never missed a Sunday visit with, both of Moosic; and many nieces and nephews.
Also preceding her in death was her grandson, Rudy Morgan; and siblings, Rose Vitack, Mary Nycz, Andrew, Frank, Joseph, Stanley and Michael Rushefski.
Her family would like to offer a special note of gratitude to Allied Services Skilled Nursing’s 3-North Staff for the tremendous care they have given her throughout her stay, along with Allied Hospice for the genuine care and compassion provided until her passing.
Private funeral services from the Thomas P. Kearney Funeral Home, Inc., 517 North Main Street, Old Forge, will be conducted by Rev. Francis Pauselli with burial at St. Mary Czestochowa Cemetery in Moosic.