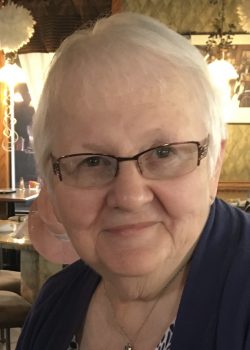 Sharon (Williams) Herbert, age 77, a longtime Hughestown resident, passed away Tuesday at Geisinger Wyoming Valley Medical Center, after an illness. She was preceded in death by her beloved husband, Willard M. Herbert on December 12, 2000.
Born in Troy on May 29, 1943, Sharon was the daughter of the late Donald G. Williams and Marjorie Hickok. A talented seamstress, she worked for several local factories before Edelstein’s Fabrics in Pittston where she would work until her retirement. She was also a member of St. Peter’s Lutheran Church in Hughestown.
Sharon’s talents in crafting, sewing and baking were memorable. Beginning by stitching several self-made costumes for her family members, it eventually grew into a costume rental business. Chances are if you were a Hughestown native and wore a costume, Sharon had created it.
Later on, she began to bring her baked goods, especially her cookies, to trade shows, ultimately becoming her customer’s go-to choice for all things baked goods.
Above all other pastimes however came spending time with her adored grandchildren and great grandchildren. Family meant everything to her and she’ll certainly be missed forever by her loved ones.
She is also survived by her three children, Billy Joe Herbert of Hughestown, Cindy Kapacs Dushko and husband Frank of Old Forge and
Susan Loree and husband Thomas of GA.; five grandchildren, David Crane, Jeremy Davis, Ashley Egan, Matthew Milazzo and Christina Krommes; nine great grandchildren; sisters, Bena Harman and husband Roger of Canton, Carlene Vanaman of N.Y., Connie Cutler and husband Bruce of N.Y. and Sharon’s special half sister, Diane Williams and Dennis of N.Y.; and many nieces and nephews.
Brothers, Charles “Chuck” Eckman and Alan “Punk” Williams and a son-in-law, John Kapacs, also preceded her in death.
Her family would like to acknowledge and thank Dr. Mauer T. Biscotti along with the staffs of both Geisinger I.C.U. and Bayada Home Health Care for their collective care and compassion.
Due to the impending inclement weather, services by Rev. Bill Brodbeck for Sharon (Williams) Herbert, 77, of Hughestown, who died Tuesday at Geisinger Wyoming Valley Medical Center, will be Sunday at 3:00 PM in the Thomas P. Kearney Funeral Home, Inc., 517 North Main Street, Old Forge. Public viewing will be from 2 – 4:00PM. Monday’s burial at St. Peter’s Lutheran Cemetery, Hughestown, will now be private.
In lieu of flowers, memorial contributions may be made in Sharon’s name to the Scranton Women’s Resource Center c/o PO Box 975 Scranton, PA 18501.