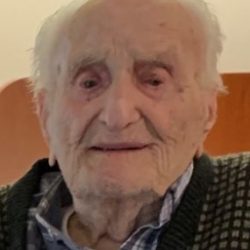 Salvatore Filippone, age 99 and a guest at the Gino J. Merli Veteran Center in Scranton, passed away Saturday morning. He was preceded in death by his wife of 55 years, Ann (Liptak) Filippone, on October 23, 2019.
Born on January 31, 1921, in Bayonne, N.J., Salvatore was the son of the late Basilio and Carmella (Carfagna) Filippone. Before relocating to Lake Ariel 31 years ago, he had owned his own landscaping business until his retirement. A decorated U.S. Army Veteran of WWII, he was also a member of St. Michael’s Orthodox Church in Jermyn. An amazing golfer in his younger days, he had won countless tournaments throughout his career. He is now at peace reunited with his beloved wife.
He is survived by nieces and nephews.
Private funeral services from the Kevin K. Kearney Funeral Home, Inc., 125 North Main Avenue in Scranton, will follow with entombment in St. Catherine’s Cemetery in Moscow.