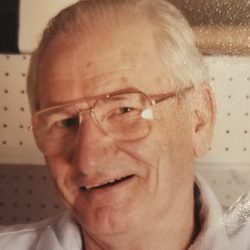 Robert (Bob) E. Philbin, age 95, of Clarks Summit passed away Sunday morning at St. Mary’s Villa in Elmhurst after a recent illness. Born in Wilkes Barre, Pennsylvania on May 15, 1925, Bob was the son of the late James W., Sr. and Janet (MacKercher) Philbin.

Joining the Navy in January 1943, Bob began his tenure with the armed forces that lasted over two decades and retired honorably at the rank of Chief Petty Officer (ABHC). After boot camp in Simpson, NY, Bob entered aircraft training on the USS Charger before transferring to the USS Wasp CV-18, where he was stationed throughout WWII. As Air Crash Crew Captain, he then served at the Naval Auxiliary Air Station in Chincoteague, Virginia. He would go on to serve aboard the USS Roosevelt CBV-42, the USS Bataan CVL-29, and then the USS Princeton CV-37, where he was stationed through the Korean War. Once stateside he served on the USS Boxer CVS-21 and on the USS Oriskany CV-34.

A well-decorated Naval ABHC, he earned the Navy Commendation Medal with Combat “V”, Presidential Unit Citation with two stars, Navy Unit Commendation with one star, the Asiatic-Pacific Campaign Medal and the Philippine Liberation Medal (2).
Bob spent two years with the California Highway Patrol and another two years as a Shore Patrolman teaching crash fire procedures and beaching large seaplanes.
After 21 years of honorably serving his country, Bob returned home to the Clarks Summit area, where he would live the rest of his life. He enjoyed working and the people who worked with him always seemed to have their day brightened. His favorite place was Dino and Francesco’s Pizzeria in Clarks Summit, where he went from being their best regular customer to their best kitchen prep man.
Bob had a special talent for cartooning. During his naval service he was asked to draw murals filled with his colorful, entertaining characters on the walls of the recreation rooms. Throughout his life, Bob loved bringing smiles and laughter to so many people with his art. People were always asking him to draw something fun for them. He touched so many people with his gift.
Bob was kind, generous, outgoing and a genuinely good man. He will be missed by his loved ones and so many other people who were fortunate to cross his path.
He is survived by his daughter April Philbin; granddaughter, India Tamalunas; sister Mary Lou (Philbin) St. Pierre, dear friends whom Bob considered family, Debbie and Tony Lupia of Dalton; local nieces Tia (Philbin) Tallman; Done` (Rosencrance) Young; close friends, Shannon Kennedy and Jennifer McMahon; and many nieces and nephews. Brothers, John G. “Jerry” and James W., Jr. Philbin, and sisters, Jeanette (Philbin) Herbert and Gloria (Philbin) Gerlitzki preceded Bob in death.
Private arrangements are under the care of the Kevin K. Kearney Funeral Home in Scranton. Please visit the funeral home’s website to leave a condolence.
Donations may be made in Robert Philbin’s name to The National Law Enforcement Officers Memorial Fund c/o 444 E Street, NW | Washington, DC 20001.