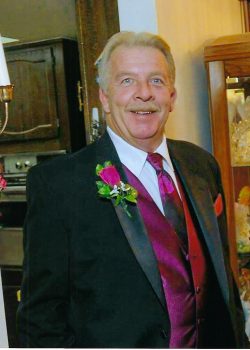 Peter J. Bohn, 63, of Madison Twp., formerly of Scranton, died Monday at Hospice of the Sacred Heart, Dunmore, after being diagnosed with Stage IV lung cancer three months ago. His loving wife of 40 years is Deborah A. (Toole) Bohn. The couple was married on August 9th, 1980.
Born May 11, 1957 in Scranton to the late Peter and Joann Kelly Bohn, he was educated in Scranton Schools. Prior to his retirement, he was employed by North Penn Dist/ DelVecchio Transport in Dunmore as a heavy equipment mechanic. A member of St. Catherine of Siena Church, Moscow, Peter loved to golf and was an avid bowler, capturing the ever elusive 300 game, which he was very proud of.
Surviving are his sisters, Kathleen Abbott, and husband, James, Scranton; Sharon Costello, Throop; Brothers-in-law, Jeffrey and wife, Lee, Joseph, and William Toole; sister-in-law, Mary Jean Schloder; and numerous nephews and nieces.
Peter was preceded in death by a sister, Lori Bohn; brothers-in-law, Joseph Costello, who was his best friend, Patrick and Robert Toole; and father and mother-in-law, William and Dorothy Phillips Toole.
A Mass of Christian Burial will be held on Saturday at 11:00 AM in St. Catherine of Siena Church, 220 Church Street, Moscow, to be celebrated by Rev. Robert J. Simon, pastor. Entombment will be private at a later date in Cathedral Cemetery, Scranton.
The church requires that those attending maintain proper social distancing while also requiring masks worn upon entering the church.
Relatives and friends may pay their respects on Friday from 4-7 PM in the Kevin K. Kearney Funeral Home, Inc., 125 N. Main Avenue, Scranton.
Memorial contributions may be made in Peter’s name to the American Cancer Society, 1300 Old Plank Road, Mayfield, PA 18433. For additional information or to leave an online condolence, please visit the funeral home website.