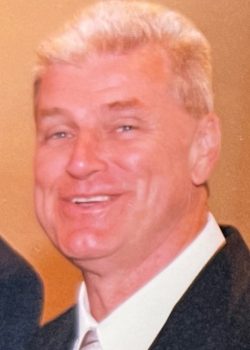 Orie Kievit, age 75, of Old Forge, passed away Friday morning at home after a longtime illness. He is survived by his loving wife, Donna (Lutkowski) Kievit. Wed on August 17, 1996, the couple were married for 24 years.
Born on October 17, 1945, and raised in Westwood, N.J., Orie was the son of the late Garrett and Helen (Ominsky) Kievit. He proudly served in the U.S. Navy during the Vietnam War, garnering the Vietnam Service, Campaign and National Defense Medals for service to his country, prior to his Honorable Discharge in 1970. He worked as an inspector for Chamberlain Corp. (General Dynamics) where he later enjoyed retirement from.
Happy-go-lucky and easy-going, to know Orie was to love him. He was a die-hard fan of the Washington Redskins football team, and a man of simple pleasures, he enjoyed his weekly car washes; “looking at TV” for a good John Wayne western; and certainly his legendary story telling. His humorous stories would captivate any audience.
Free from illness and now at peace, he’ll long be missed by his loving family and friends.
He is also survived by his son, Donald Kievit and wife Robin of Salem, Oregon; step-daughter, Dawn Materazzi of Duryea; grandchildren, Steffani, Codi, Hannah, Bryson and Kaden Kievit and Trinity Pilosi; his brother-in-law, Louis Lutkowski and companion Janine LaRusso of Moscow; and several nieces and nephews.
He was preceded in death by his mother-in-law Dolores Lutkowski.
His family would like to acknowledge and thank Dr. Armando Sallavanti & staff for care and compassion.
A celebration of Orie’s life will be Sunday at 4:00 PM at the Thomas P. Kearney Funeral Home, Inc., 517 North Main Street, Old Forge, to be celebrated by Rev. Dr. Michael Shambora, Pastor of the Stewart Memorial United Methodist Church in Old Forge. Military honors by the AMVETS Honor Guard will follow. Burial will be at Indiantown Gap National Cemetery in Annville.
Family and friends may pay their respects on Sunday between 2-4 PM at the funeral home.
In lieu of flowers, memorial contributions may be made in Orie’s name to the American Heart Association c/o p.o. Box 417005, Boston, MA 02241-7005. Please visit the funeral home’s website for directions or to leave an online condolence.