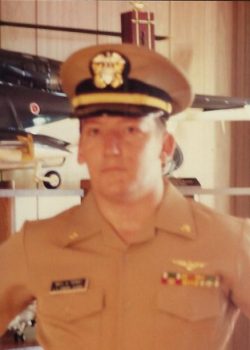 Neil Terry, age 64, of West Scranton, passed away Tuesday morning at home. He is survived by his beloved wife, Mary Ann (Walsh) Terry. The couple would have celebrated a 33rd wedding anniversary on September 19th.
A lifelong resident of Scranton, Neil was born on November 10, 1955, and was the son of the late Charles and (Jeanne) Merrick) Terry. A graduate of the former Scranton Technical High School, Class of 1972, he then proudly served in the U.S. Navy during the Vietnam War before his honorable discharge from service. He was a longtime security guard, most recently for the former Mid Valley Hospital.
Neil’s #1 hobby was as a collector. He especially loved his WWII model planes, his radio control models and his guitars. A lifelong musician from his younger days in a band, he was a longtime guitarist. The Halloween and St. Patrick’s Day parades Neil and Mary Ann had thrown will long be legendary, and as an animal lover, he especially adored his pups, “Gia” and “Fifi.
Neil had an amazing sense of humor, never to be forgotten, and he’ll loved be missed by loving family and friends.
Of Roman Catholic faith, he was a member of St. Patrick’s Parish in West Scranton.
He is also survived by his siblings, his brother, James Terry and wife Kathy of Scranton and Linda Roth of Jefferson Twp.; sisters-in-law, Patricia Kelly of Weatherly, Kathleen Moroski and husband Tom and Kevin Walsh, all of Scranton; and nieces and nephews.
A brother-in-law, Michael Walsh, also preceded him in death.
Blessing services by Rev. Richard Fox, St. Patrick’s Parish Pastor, at the Kevin K. Kearney Funeral Home, Inc., 125 North Main Avenue, Scranton, will be private. Burial with military honors by the AMVETS Honor Guard at Cathedral Cemetery in Scranton will follow.
In lieu of flowers, memorial contributions may be made in Neil’s name to the Griffin Pond Animal Shelter c/o 967 Griffin Pond Rd, South Abington Township, PA 18411.