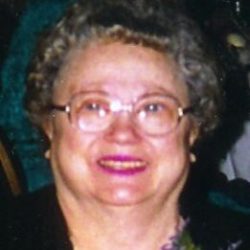 Mildred A. Guerrieri, age 74, of Hollywood, Fla., died Wednesday afternoon in the at Kindred Hospital in Hollywood, Fla.
She is survived by her husband Carmine Guerrieri.They would have celebrated their 50th wedding anniversary on April 30th, 2005
Born in Old Forge on October 1, 1930 she was the daughter of the late George Shubelko and the late Julia Rishko Shubelko DeMatteo, she settled in Hollwood 3 years ago.She was educated in New York City Schools.
Before her retirement she was employed in the finance department for the City of New York.She was a member of St. Nicholas of Myra Byzantine Catholic Church, Old Forge. She was also a member of M.O.O.S.E. Lodge and the American Legion Auxiliary, both in Hollywood
Surviving is one son, George Guerrieri and his wife Mercedes of N.Y.C., N.Y. and 1 granddaughter Bethany and a sister-in-law Noella Guerrieri, Johnson, R.I. Nieces Paula and Donna Guerrieri and Pam Kelly and her husband Jim. Nephews Jim and Richard Guerrieri and John Guerrieri and his wife Sharon. Cousins Dolores Mokay, Eleanor Antosh, John and Carolyn Walker and Stephen, Richard, Edward, and Billy Rishko.
She was preceded in death by a daughter Antoinette Guerrieri. The funeral will be Tuesday at 9:15 A.M. with a Panachida service in the Thomas P. Kearney Funeral Home, 517 North Main Street, Old Forge followed by Divine Liturgy at 10:00 A.M. in St. Nicholas of Myra Byzantine Catholic Church, corner of Church & Vine Streets in Old Forge to be celebrated by the Rev. Gary J. Mensinger, Pastor and the
Rev. Nicholas Kraynak. Interment will be at St. Nicholas Cemetery in Old Forge.Friends may call Monday from 5-8 P.M.Parastas services will be conducted Monday evening at 6:00 P.M.
For directions or to send an online condolence, please visit www.kearneyfuneralhome.com