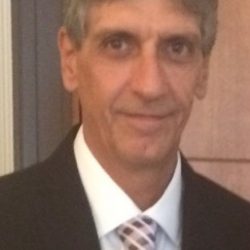 Kenneth (Ken) A. Perna, Sr., age 60, a lifelong resident of Scranton, passed away Wednesday at home after an illness. Surviving is his best friend, caregiver and wife of 41 years, Elizabeth (Liz) Balendy Perna. The couple married December 10, 1977.
Born on May 27, 1959, and raised in West Scranton, Ken was the son of the late Anthony Perna and Pauline (Jackson) Perna Craven. A graduate of West Scranton High School, Class of 1978, he then learned the welding trade at Johnson College. He was a longtime member of the local iron workers union, having spent over 30 years as a shop steward and welder for the Standard Iron Works of Scranton prior to retirement.
A die-hard sports fanatic, Ken was a loyal fan of both the Dallas Cowboys and the Philadelphia Phillies. A longtime bowler, he was a fixture in South Side league play for decades. Until illness, he still played league softball and his best memories on the diamond came while playing alongside his sons.
He had a tremendous work ethic and strong loyalty; he was always willing to help both family and friends in need; and above all, he was a devoted family man. He will long be remembered as he leaves his legacy in good hands.
He is also survived by his three loving sons, Kenneth Perna, Jr. and companion Rebecca Jones of Brooklyn, N.Y., Jason Perna and wife Lisa of Throop and Tony Perna and wife Lisa of Scranton; his seven adoring grandchildren, Kenneth (Tyler), Shyanna, Antonio, Anthony, Colten, Conner and Aubrey Perna; six step grandchildren; his brother, Gino Perno of Clarks Summit; and nieces and nephews.
His sister, Dorothea Baldoni and an infant brother, Tony Perna, also preceded him in death.
His family would like to thank Matthew Dennebaum and the entire Standard Iron Works family for their extraordinary help to ensure Ken was well taken care of throughout his illness. Also, they would like to thank Sacred Heart Hospice’s entire staff for the amazing care given to both Ken and his family.
A blessing service is scheduled for Saturday at 3:00PM at the Kevin K. Kearney Funeral Home, Inc., 125 North Main Avenue, Scranton. Family and friends may pay their respects on Saturday from 1:00PM until services. Please visit the funeral home’s website for directions, flowers or to leave a condolence.