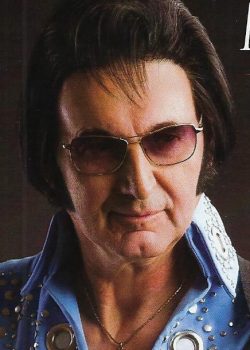 Joseph J. Sabo, Jr., age 63, a lifelong Scranton resident and a well-known Elvis Presley Tribute Artist, has passed away Thursday at home, after an illness. He is survived by his wife of 19 years and loving caregiver, Kimberly Sabo.
Born on June 15, 1957, and raised in Scranton, Joe was the son of Judy (Burke) Sabo of Scranton and the late Joseph J. Sabo, Sr. A graduate of the former Scranton Central High School, Class of 1975, from coast to coast Joe was a longtime truck driver. He drove for Walmart and Innocor, but he was also the proud owner of Sabo Trucking, having operated ten trucks within his company.
In his youth, he was a member of the Scranton Northeast Skateaway Flyers Hockey Team, where he not only served as team captain, but he also led his league in scoring while winning several national championships throughout his career. Once he retired from hockey, he began dance skating. Teamed-up with his Aunt Char, he went on to win third place at the competition.
A lifelong outdoorsman, Joe especially loved both fishing and hunting, always having the fondest memories of doing so with his Dad and brother.
His true passion came after his retirement from trucking. Joe became a well-known Elvis Tribute Artist. A fixture at The Woodlands in Wilkes Barre alongside dear friends, Frankie and Toby, his travels spanned from Lake George, New York to Memphis, Tennessee, to compete in Elvis competitions.
Joseph J. Sabo will never be forgotten and forever loved by all who knew him.
He is also survived by his step-son, Antonio Cellar and wife Amy and their children, Evie and Lena; Sean Fairweather, Jr.; siblings, Donald Sabo and wife Darlene and their children Nicholas and Nicole and Lori Sosa and husband Gustavo and their children Joey and Cordaro.
Kimberly wishes to thank the entire staff of Hospice of the Sacred Heart for its tremendous care and compassion, as well as to Joe’s cousins, Debbie and Gino Bowers, for the love, support and caregiving throughout Joe’s illness.
A celebration of Joe’s life is set for Saturday, April 17th, at 7:00 PM in the Kevin K. Kearney Funeral Home, Inc., 125 North Main Avenue in Scranton. Services will be led by Rev. Dr. Michael Shambora.
Family and friends may pay their respects on Saturday between 12-2:00 PM and 5-7:00 PM at the funeral home. Interment, private.
In lieu of flowers, memorial contributions may be made in Joe’s name to Sacred Heart Hospice c/o 100 William St, Dunmore, PA 18510.