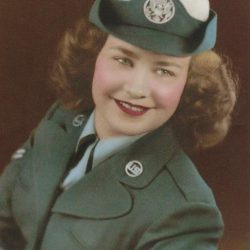 Joan M. Daniel, age 86, of Hughestown, passed away Sunday evening at The Jewish Home of Eastern Pennsylvania, where she was a recent guest. She is survived by her beloved husband, Albert Daniel. Together since their days in the U.S. Air Force during the Korean Conflict, the couple would have celebrated a 65th wedding anniversary on December 28th.
Born in Pittston on March 28, 1932 and daughter of the late George and Stella Rice Karichner, Joan was a graduate of the former Hughestown High School. Upon graduation she enlisted in the Air Force, meeting her husband while proudly serving their country together. Upon her Honorable Discharge, she and Albert married and began to raise a family while Albert was still stationed overseas. They called Vienna, Austria and Naples, Italy home before returning stateside. After several domestic stops, they eventually settled in Hughestown.
Joan was an avid reader, an excellent cook, and a fixture at family game night where pinochle was her specialty game. Above all else was her family, sacrificing so much throughout her husband’s lengthy military career just to ensure their happiness. Now at peace, she will forever be missed.
She is also survived by her three children, Gayle MacDonald and husband Thomas of Old Forge, Lori Scholeck of Hughestown and Andrea (Stormy) Daniel and fiancé Tony D’Amico of Exeter; seven grandchildren, Amy, Todd and Shawn Soska, Matthew and Tommy MacDonald, Bryan and Anthony D’Amico; three great grandchildren, Jaxson D’Amico, Matthew Conner MacDonald and Kylie Soska; and many nieces and nephews.
A son, Jerry Daniel; a grandson, John (Ziggy) Soska; and twin siblings, Charles (Chuck) Karichner and Charlotte Chairge, also preceded her in death.
Her family would like to extend their gratitude to the entire staffs of both The Jewish Home and Compassionate Care Hospice for providing Joan with such tremendous care and comfort throughout her illness.
Private arrangements are under the care of the Thomas P. Kearney Funeral Home, Inc., 517 North Main Street, Old Forge.
In lieu of flowers, memorial contributions may be made in Joan’s name to the Muscular Dystrophy Association, c/o 161 N. Clark, Suite 3550, Chicago, Illinois 60601.