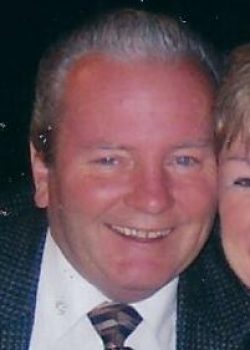 Jerome (Jerry) J. Myers, 77, of Lake Winola and formerly of West Scranton, died Sunday at home. He is survived by his beloved wife and best friend, Kathryn “Kathy” (Gavin) Myers. The couple celebrated 52 years of marriage on June 29.
A West Scranton native, he was born July 16, 1943, to the late Jerome F. and Jean (Bird) Myers. A 1961 graduate of St. Patrick’s High School, he also served his country for four years in the United States Army Reserves.
He worked as merchandise manager for Oppenheim’s and, upon its closure, he ultimately took over and operated his father’s business, Jerome Myers Interiors, Scranton.
In his early years, Jerry enjoyed waterskiing at the lake, golfing and fast cars. He was a member of the Scranton Canoe Club and was a fixture at his bay window overlooking Lake Winola. If it happened at the lake, Jerry was the first one to know about it. He also enjoyed time spent at the family home in Bradenton, Fla.
Above anything else came his family. He absolutely adored his three daughters and four grandchildren (who certainly loved their “Pop”) just as much as he adored his wife. He’ll be forever missed by his family and friends.
Of Roman Catholic faith, he was a lifelong member of St. Patrick’s Church in West Scranton.
Surviving are his loving family: daughters, Regina Myers and Terry Tansley, Sarasota, Fla.; Michelle Conaboy and husband, Kevin, Washington Twp., N.J.; and Lindsay Fallico and husband, Nick, Park Ridge, Ill.; and his grandchildren, Addison and Aidan Conaboy and Noah and Rosalie Fallico.
The funeral will be Saturday at 9:15 a.m. from the Kevin K. Kearney Funeral Home Inc., 125 N. Main Ave., Scranton, with Mass of Christian Burial at 10 in St. Patrick’s Church, 1403 Jackson St., West Scranton, to be celebrated by Rev. Richard Fox, pastor. Burial, St. John the Baptist section of Cathedral Cemetery in Scranton.
Family and friends may pay their respects Friday from 4 to 7 p.m. at the funeral home. In lieu of flowers and with the family’s gratitude for amazing care and compassion in their time of need, memorial contributions may be made in Jerry’s name to the Lake Winola Fire Company 1, 1204 PA-307, Factoryville, PA 18419.