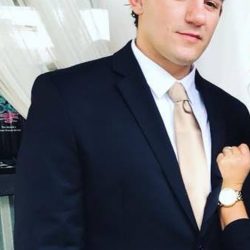 Jeffrey (Jeff) Hudak, of Old Forge and owner of area barber shop, Diesel Hair Studio, passed away Thursday morning at Thomas Jefferson University Hospital in Philadelphia after an illness. He was 34 years old. Married on September 10, 2014, he is survived by his loving wife, Erin (Pajor) Hudak, and his beloved daughter, Natalie Hudak.
Born on July 20, 1985, and raised in West Scranton, Jeff was the son of Jeff Hudak of Ransom and Linda (Olivieri) Pagnotti of Old Forge. He attended Lackawanna College before becoming a licensed barber upon completion of his courses at Empire Beauty School. In August of 2012 he opened Diesel Hair Studio in Scranton where his skills as a barber and passion for his work resulted in a tremendous customer following. He became much more than just a barber. He became a trusted friend.
Beyond the shop, he loved riding his motorcycle; enjoyed the beach; cherished family time; but above all else, he was happiest when being with his daughter. He would want nothing more now than for Natalie to know how much her Daddy loved her.
Leaving an amazing impact on all of those who knew him, Jeff will be deeply missed by his family and friends alike.
He is also survived by his sister, Brittany Rhodes and husband Adam of Old Forge; his grandmother, Marie (Carfelo) Hudak of Scranton; his in-laws, Jack and Paula Pajor of Old Forge; his sister-in-law, Amanda Duffy and husband Michael of Newton Square; and many loving aunts, uncles, cousins, nephews and friends.
A special aunt, Simone Ann Hudak-Johns, who Jeff shared a special bond also preceded him in death.
A Blessing Service, to be conducted by Rev. August Ricciardi, Prince of Peace Parish Pastor, will be Monday at 7:00PM in the Thomas P. Kearney Funeral Home, Inc., 517 North Main Street, Old Forge.
Relatives and friends are welcome to celebrate Jeff’s life on Monday from 4:00PM until blessing.
In lieu of flowers, memorial contributions may be made to Natalie Hudak’s education fund c/o Bank of America.