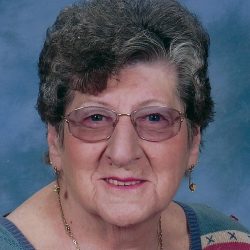 Jean Harrington, age 88, of Taylor, passed away Wednesday evening. She was preceded in death by her beloved husband, Patrick Harrington, on March 8, 1979.
Born on December 20, 1930, and raised in Glendale, Jean was the daughter of the late Kathren and David Warner. A graduate of the former Moosic High School, upon raising her family she worked as a seamstress for Brooks Manufacturing, Old Forge. A lifelong member of the Moosic Presbyterian Church, she was active within the congregation as a member of the church choir, the funeral bereavement committee and all volunteer functions.
From 1989 until 2006, Jean was both a Scranton/Wilkes Barre Red Barons season ticket holder and loyal member of the team’s fan club. Also a member of the Moosic Senior Citizens, she was amazing at her favorite pastime: knitting and sewing. She will be dearly missed by family and friends.
She is survived by her four daughters, Kathren McCann of FL., LuAnn Jenkins and husband David of Nicholson; Kim Wysokinski and husband Tom, Sr. of Old Forge and Lisa Seaman and husband David of Glendale; nine grandchildren, Timothy, Ryan and Colin McCann, Matthew and wife Pooja, David and Kailey Jenkins, Tom, Jr., and Jason Wysokinski, and Emily Seaman; four great grandchildren, twins Benjamin and Julia, Meera and Rohan; a sister-in-law, Joan Warner of NJ.; and nieces and nephews.
A brother, David Warner; a grandson, David Seaman; and a son-in-law, William McCann also preceded her in death.
Funeral services are scheduled for Friday, March 1st, at 11:00AM at Moosic Presbyterian Church, 625 Main Street in Moosic, to be conducted by Rev. Roger Griffith, Pastor. Burial will follow at Marcy Cemetery in Duryea. Relatives and friends may pay their respects on Friday from 10:00 a.m. until services. Those attending the funeral are asked to go directly to the church.
Arrangements are under the care of the Thomas P. Kearney Funeral Home, Inc., 517 North Main Street, Old Forge. In lieu of flowers, memorial contributions may be made in Jean’s name to the Moosic Presbyterian Church, c/o 625 Main St., Moosic, Pa., 18507.