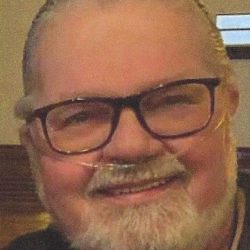 Hugh Connelly, Jr., age 68, of Old Forge and a Philadelphia native, passed away Sunday at Geisinger Community Medical Center in Scranton, after an illness. He is survived by his loving wife, Sheri Gilarde Connelly. The couple celebrated their 10th wedding anniversary on May 28th.
Born in Philadelphia on January 31, 1950 and son of the late Hugh, Sr. and Dorothy Murphy Connelly, Hugh was a graduate of Father Judge High School, Class of 1967, before attending Lasalle University. Prior to his retirement, he served as owner and account manager for Connelly Collision, Inc.
Loyal to his Philly sports teams, Hugh was especially a die-hard fan of the Philadelphia Eagles. Their win in Super Bowl XXXIX was his proudest moment as a lifelong sports fan. He was a proud Irishman who was a member of the Irish Society and an avid reader, he also loved his music, especially soul.
Wise, friendly, loving and a “man’s man” are only a few of the countless words used to describe him. He had a great sense of humor, always told it how it was and absolutely adored people, making friends seemingly wherever he would go. Above all was his family as he was an adoring husband, Dad and grandpa who will be forever missed.
He is also survived by daughters, Ciara O’Malley and Joseph Angeli of Old Forge and Danielle O’Malley of Scranton; beloved grandchildren, Santina and Riley; his brother, Jack Connelly of New Jersey; and his mother-in-law, Esther Leone of DunmorE.
Hugh’s life will be celebrated on Sunday, October 14th, at Cafe Rinaldi, 426 S. Main Street in Old Forge beginning at 1:00PM with a 3:00PM blessing service by Rev. Gary Mensinger. Cheers to Hugh with his favorite, a Grey Goose Martini!
Arrangements are under the care of the Thomas P. Kearney Funeral Home, Inc., 517 North Main Street, Old Forge.