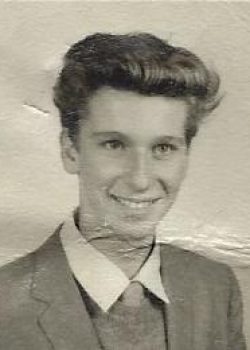 Harry J. Rhodes, 77, a resident of Moosic, died Thursday morning at Geisinger Community Medical Center after being stricken ill at home. His beloved wife of 57 years is Allison S. (Mather) Rhodes.
Born January 10, 1943 in Philadelphia, to the late John and Angelina (Cipriano) Rhodes, he was Educated in Triton Regional High School, Runnemede, NJ. Harry was a real “sweet” guy who worked for Entenmann’s Bakery and then for Hostess Bakery as a driver/salesman. Not being the type who could sit still for too long, he later took a job at Wal-Mart in Taylor. His work ethic was second to none and his passion was providing for his family. He enjoyed spending time at the Taylor Community Center, where he made countless wonderful friends throughout the years. Harry and Allison were members of Mary Mother of God Parish, North Scranton.
Surviving in addition to his wife are his children, a daughter, Eileen Rempe and husband of Moosic and two sons, David Rhodes and wife of Nebraska and Harry Rhodes and wife of Georgia; a brother, Alfred Rhodes of Runnemede, NJ; numerous grandchildren and several nieces and nephews.
A sister, Jane O’Keefe, predeceased him in death.
Private arrangements are under the care of the Thomas P. Kearney Funeral Home, Inc., 517 North Main Street in Old Forge.
Memorial contributions may be made in Harry’s name to either the Taylor Community Center c/o 700 S. Main St., Unit 2, Taylor, PA 18517 or Mary Mother of God Parish c/o 316 William Street, Scranton, PA 18508. For additional information or to leave an online condolence, please visit www.kearneyfuneralhome.com.