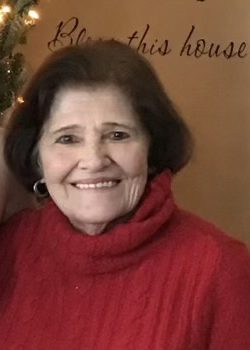 Elizabeth “Betty” (Rybitski) Aversa, age 86, of Old Forge, passed away Saturday evening at Geisinger Community Medical Center in Scranton, after a sudden illness. She was preceded in death on May 1, 2013 by the love of her life whom she missed terribly – her beloved husband of 59 years, Joseph Roy “Beansie” Aversa.
Born in Scranton on October 7, 1934, Betty was the daughter of the late Joseph and Ceil (Lipinski) Rybitski. A graduate of the former South Scranton Catholic High School, she then worked as a telephone operator for Bell Telephone Co. Upon marriage, she began to raise a family – a family of eight children who served as the focal point for the rest of her life.
Always on the go, if Betty wasn’t seen cruising through Old Forge, she could be found at the Moosic Senior Center, playing Joker Poker at the Mohegan Sun, out for a good meal, Dollar General shopping or, most importantly, at every event to which her grandchildren participated. Affectionately known as “GaGa” to her family, she was a fantastic wife, mother, grandmother and sister who would go above and beyond for anyone in need.
Of a deeply devoted Roman Catholic faith, she was a longtime member of Prince of Peace Parish in Old Forge.
She is survived by her loving family: her eight children, five sons, Anthony J. Aversa and wife Colleen of New Hampshire; Joseph J. Aversa and wife Sandra of Philadelphia; Martin J. Aversa and Matthew J. Aversa, both of Dingmans Ferry; Michael J. Aversa and wife Molly of Old Forge; and three daughters, Elizabeth (Lee) M. Hochreiter and husband Neil of Old Forge, Christine M. Comerford and husband Joseph of New Jersey; and Rene S. Aversa-Heeley of New York; her thirteen grandchildren; her two siblings, Diane Mosley of Mayfield and Joseph Rybitski and wife Bernie of Albany, N.Y.; and many nieces and nephews whom she adored.
A son-in-law, Keith Heeley; a brother, Thomas Rybitski; a brother-in-law, Michael Mosley; also preceded her in death.
Funeral services are scheduled to begin on Friday at 11:00AM from the Thomas P. Kearney Funeral Home, Inc., 517 North Main Street, Old Forge, with a noon Mass of Christian Burial and Committal at St. Mary of the Assumption Church, Prince of Peace Parish, in Old Forge, to be celebrated by Rev. Joseph Mosley, Betty’s nephew. Burial will be at the Old Forge Cemetery. Family and friends may pay their respects on Friday between 9:00 AM and 11:00 AM at the funeral home.
In lieu of flowers, memorial contributions may be made in Betty’s name to either Meals on Wheels of NEPA c/o 541 Wyoming Ave., Scranton, PA 18509 or to St. Joseph’s Center c/o 2010 Adams Ave., Scranton, PA 18509.