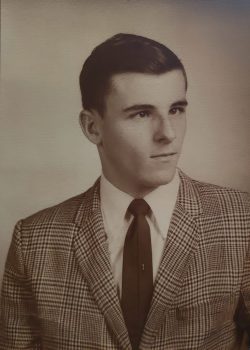 Dominic G. Toraldo, Jr., age 71, of North Scranton, passed away Monday morning at home with his family by his side and shortly before the death of his sister, Kathryn McKenna. He is survived by his wife, Judith A. (Kelly) Toraldo.
Born on July 10, 1950 and raised in South Scranton, Dominic was the son of the late Dominic, Sr. and Anne (Gaffney) Toraldo and a graduate of the former Scranton Technical High School. A devoted Roman Catholic, he was a member of Mary, Mother of God Parish where he was also a longtime maintenance volunteer. For years until his recent illness, Dominic had worked with pride and loyalty for the maintenance department of All Saints Academy in West Scranton for over two decades. A Fourth Degree Grand Knight, Dominic was also an active member of the Knights of Columbus #280 where he also served as the financial secretary.
Long remembered for countless things, he was always helpful to those in need. His work ethic was admirable and he was always the first to crack a joke. Now at peace, he will forever be missed.
He is also survived by his devoted brother, Paul Toraldo and wife Mary (Pullo) Toraldo of Hanover, MD.; a sister-in-law, Patricia (Chelland) Toraldo; a brother-in-law, Michael Maguire; sister Kathryn’s companion, Phil Fuller; and many nieces and nephews.
Dominic was also preceded in death by seven siblings, Alice Marie Maguire, Mary Louise Logan, Gaetano Toraldo, Gerard Toraldo, infants Bernard and Ann Toraldo and, also on Monday morning, Kathryn McKenna; and his step mother, Ann (Walsh) Toraldo.
Joint funeral services are scheduled for both Dominic and Kathryn on Monday at 11:00 AM in the Thomas P. Kearney Funeral Home, Inc., 517 North Main Street, Old Forge, to be celebrated by Rev. Martin Gaiardo. Burial will follow at the Cathedral Cemetery in Scranton. Family and friends may pay their respects on Sunday between 3-7:00 PM at the funeral home. As per the family’s wishes, masks are to be worn at the funeral home.
With Dominic’s family’s deepest appreciation for their amazing outpatient care, all memorial contributions are asked to be made to the Allied Services Hospice Center, 100 Abington Executive Park, Clarks Summit, PA. 18411.