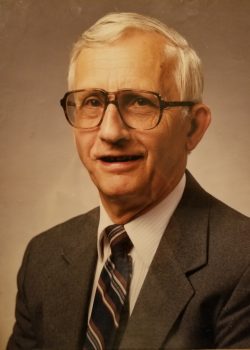 David (Dave) W. Johns, Sr., age 95 and a longtime Moosic resident, passed away Tuesday evening at Wesley Village in Jenkins Twp., after a recent illness. On January 27, 2008, he was preceded in death by his beloved wife of 58 years, “Betty” Lorraine E. (Decker) Johns.
Born in Taylor on September 3, 1925, Dave was the son of the late William and Catherine (Jenkins) Johns. A graduate of the former Taylor High School, he then proudly served his country in the U.S. Navy during WWII. Honored for his service, he was awarded the Pacific Theater Ribbon with 5 Stars; the American Theater Ribbon; the WWII Victory Medal; and the Philippine Liberation Ribbon with 2 Stars, prior to his honrable discharge in 1945.
A retail manager for most of his career, Dave worked for the former Dean Phipps and Jewelcor, before retiring from Wes Freedman Jewelers. Possessing the gift of gab, an amazing memory and an infectious smile, Dave was not only great at his profession, but had a genuine heart in making friends everywhere and anywhere he went.
He was a pillar of the Brick United Methodist Church in Duryea for many years, as well as a 50-year member of the Moosic Lodge 664 F & AM. He was also a member of the St. David’s Society and a shriner of the Irem Temple.
Upon his retirement, he worked as a funeral assistant for the Thomas P. Kearney Funeral Homes, and was a familiar face at his son’s business, Cedar Bike in South Scranton. To know Dave was to love him and his memory will certainly live on.
He is survived by his best buddy and son, David W. Johns, Jr. and wife Veronica of Moosic; his adored grandchildren, Danielle Reynolds and husband Brian; David Johns, III and wife Christine and Cheryl Ostrowski and husband Robert; great grandchildren, Hannah and Luke Johns, Katherine Reynolds and Logan and Lola Ostrowski; a sister-in-law, Mary Decker of Moosic; and loving nieces and nephews.
Siblings, Arlene Paff, Catherine Graziano and Bruce Johns, also preceded him in death.
Private funeral services by Rev. Dr. Michael Shambora will be from the Thomas P. Kearney Funeral Home, Inc., 517 North Main Street, Old Forge, followed by burial with full military rites by the AMVETS Honor Guard at Fairview Memorial Park, Elmhurst Twp.