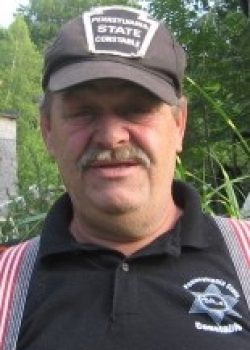 Bruce R. Kreig, age 65, a longtime Moosic resident, passed away on Tuesday after an illness with his loved ones by his side. He is survived by his loving wife, Nancy (Grochal) Kreig. The couple recently celebrated their 48th wedding anniversary on May 4th.
Born on January 9, 1956, and raised in Moosic, Bruce was the son of the late Theodore L. and Romayne (Webb) Kreig. Following school, he began working for his Father’s business – Kreig Excavating – which began his lifelong career as a heavy equipment operator. Prior to his 2011 retirement, Bruce was a member of the Local #542 International Union Of Operating Engineers (IUOE). He was also a proud longtime Pennsylvania State Constable.
An outdoorsman, he also enjoyed hunting and fishing. With Nancy always by his side, he never passed up a stop at a good flea market and together they enjoyed going out to eat and taking frequent trips to the Lancaster area.
From fixing cars to welding, Bruce always had a project in the works. Above all else, he adored his grandchildren and would have done anything for them. They were his pride and joy.
He faithfully followed the Peckville Assembly of God Church and was a firm believer in God. He held tight to his faith until the very end. His family would like to acknowledge and express their deep gratitude to Pastor Terry Drost and his wife Becky for visiting him and providing him comfort while in hospice. Now free from illness and at peace, he will forever be deeply missed by his family and friends.
He is survived by his children, Heather Paglianite Hajri and husband Ahmed of Wyoming, Nicole Jones and husband Lee of Wapwallopen, Bruce Henry Kreig and companion Crystal D’Annunzio of Moosic and Kyle Theodore Kreig and his wife Jennifer of Pittston; his 13 grandchildren; three brothers, Ted Kreig, Jr. of Moosic, Karl Kreig and wife Debbie of Springbrook and David John Kreig of Moosic. He also left behind many wonderful friends, cousins and other relatives.
His family wishes to acknowledge and thank the staff of Highland Manor for their care of Bruce in his final days.
A celebration of Bruce’s life is scheduled for Monday at 7:00 PM in the Thomas P. Kearney Funeral Home, Inc., 517 North Main Street, Old Forge.
Family and friends may pay their respects on Monday between 4-7:00 PM at the funeral home. Please visit the funeral home’s website for directions or to leave a condolence.