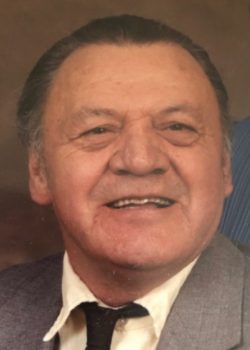 Alex M. Chubb, age 88, of Avoca and formerly of Old Forge, passed away Sunday evening at Regional Hospital of Scranton, after an illness. He is survived by his beloved wife, Ellen (Hull) Chubb. The couple were to celebrate their 60th wedding anniversary on July 5th.
Born on December 23, 1931 and raised on the The Mohawk Nation at Akwesasne, Alex was the son of the late Angus and Susan Chubb, both members of Akwesasne in the Ontario province of Canada. Proud of his ancestral native American roots, Alex was long known by friends as “chief.”
After settling in the region and marrying Ellen, he then raised his two adoring daughters. By the time of his passing, he was blessed to see five generations of his family.
He worked for many years as a laborer in both machinery and construction, and even upon his retirement he still kept busy tinkering with anything he could get his hands on. From electronics to cars, there was seemingly nothing he couldn’t fix.
He was a faithful member of the Triboro Community Church in Old Forge, and even upon illness he still volunteered as the church’s housekeeper.
Above all else came his family. The ‘lights of his life’ were undoubtedly his daughters and grandchildren, whom all adored their “Pop.” He will forever be missed by family and friends.
He is survived by his loving family; two daughters, Kimberly Chubb of Avoca and Ellen Warner and husband James of Scranton; his sisters, Josephine Leaf and Susan Chubb, both of Ontario; four grandchildren, Tonya (Chubb) Dutter, Pamela Panek; Michelle Bergey and Andrew “A.J.” Warner; five great grandchildren; a great-great granddaughter; and nieces and nephews.
Siblings, Joseph, Marion, Rosemary and Dinah Chubb; and a great grandson, John Dutter Weikel, also preceded him in death.
His family wishes to thank both the staffs of Traditional Home Health as well as Regional Hospital for their tremendous care throughout Alex’s illness.
Funeral services by Rev. Keith Weber will be private from the Thomas P. Kearney Funeral Home, Inc., 517 North Main Street, Old Forge, with burial at Laurel Hill Cemetery, Daleville.
Memorial contributions may be made in Alex’s name to the Triboro Christian Academy c/o 100 S Main Street, Old Forge, PA 18518.